Born in Hungary in 1933, János Sándor began his professional career at the age of 18, as principal timpanist and youngest member of the Hungarian Radio and Television Symphony Orchestra. He studied conducting at the Franz Liszt Academy, Budapest, where he graduated with distinction, and in Siena (Italy) with renowned conductor Sergiu Celibidache. A prize-winner at the Besançon (France) International Conductors Competition, he conducted major orchestras across Europe and North America, making over 30 recordings. His recording for Hungaroton of Bartók's Miraculous Mandarin, Dance Suite and Hungarian Peasant Songs, qualified as one of "the best five recordings of the year" in Hi-Fi News, and was awarded the Arthur Honegger Prize of the Grand Prix Nationale du Disque. Possessor of an extraordinary gift for encouraging young people, he was a founder and regular conductor of Jeunesses Musicales in Hungary, and invited guest conductor at International Youth Orchestra Festivals in Switzerland, Scotland, and Canada, where he conducted the Gala concert of the inaugural Festival of Canadian Youth Orchestras in Banff in 1974, returning frequently for 15 years.
After moving to Canada in 1991, Mr. Sándor was guest conductor with the Victoria and Edmonton Symphonies, the CBC Vancouver Orchestra, and the Sonor Ensemble of San Diego, and regularly returned to conduct in Europe. In 1995 he joined the University of Victoria as Artist-in-Residence, Music Director and Conductor of the UVic Orchestra and Chorus. He was appointed Music Director of the Greater Victoria Youth Orchestra in 1996.
In his native Hungary, János Sándor was awarded the "Franz Liszt" prize, the title "Merited Artist of the Hungarian Republic", and "Honorary Life Member" of the Györ Philharmonic Orchestra, which he founded as a professional orchestra in 1968.
After his death in May 2010, the GVYO produced a Special Edition Society Newsletter - June 2010 with tributes to János Sándor.
The Twenty Fifth Anniversary Season of the GVYO was dedicated to the memory of János Sándor in gratitude for fifteen years of musical mentorship. 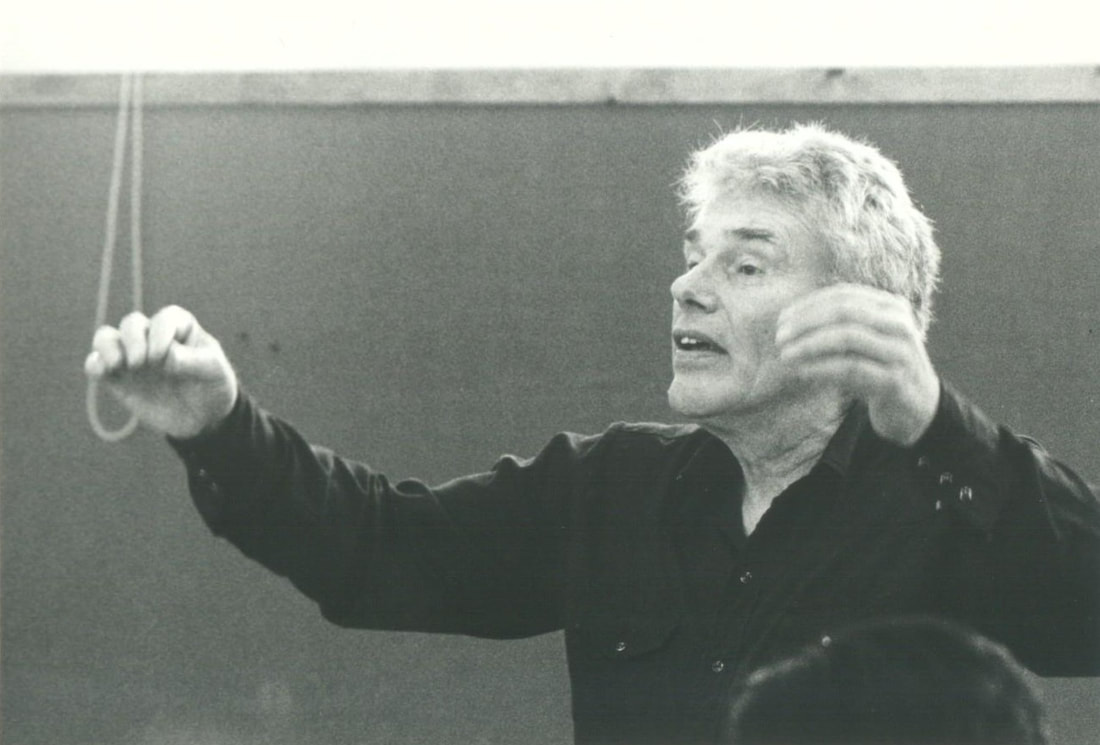 Born in Manchester, UK, Stuart Knussen received his musical training in England, Hamburg, and Chicago. His career took him to every corner of the globe, as an orchestral player, solo performer, recording artist, conductor, and broadcaster. Mr. Knussen was a founding member of the Academy of St. Martin-in-the Fields, and was Principal Bass with the London Symphony Orchestra for nineteen years, including five years as Chairman of its Board of Directors. Following associations with the Kitchener-Waterloo Symphony and the Canadian Association of Youth Orchestras at Banff, he moved to Victoria in 1983 where he taught at the Victoria Conservatory of Music and established the Greater Victoria Youth Orchestra.
Stuart Knussen devoted his years in Victoria to young musicians, encouraging, challenging and counseling them in their musical development. He shared with them his own profound and passionate love of music, and his conviction of the whole-hearted commitment which music demands from those who would pursue the art. His vision for the GVYO continues to inspire the orchestra and its players to this day.
The players of the GVYO dedicated their concert on March 10, 1990 featuring Beethoven’s Seventh Symphony to Stuart – the man who brought them together and guided them in what for many of them was their first experience of symphonic music.
The following obituary, written by distinguished critic Edward Greenfield, appeared in the Manchester Guardian in January, 1990.
Powered by