​The GVYO Tour
from a player's
​perspective

Being a part of the GVYO's 25th Anniversary Tour was undoubtedly the highlight of my year. Seeing the many beautiful sights, bonding with friends, playing great music for appreciative audiences, and being part of a cooperative team of caring people, made for an experience I will never forget.

The programme of our final concert and tour featured music by Mozart, Kodály, Estacio, Britten, and Elgar, and was a special tribute to János Sándor. The performance on April 17th at UVic Centre felt magical - I sensed so much love, compassion, and enthusiasm, in the atmosphere backstage and in the music making itself. It definitely felt as though János was there in spirit.

In the evening of April 20th, the air around St. John's Hall buzzed with excitement as GVYO members boarded the tour bus. Once we were on the road, GVYO manager Sheila Redhead and tour coordinator Diana MacDonald handed out a detailed itinerary to each player - a small piece of evidence of the enormous amount of careful planning they'd undertaken to realize this trip for us. First stop: Port Alberni, where we stayed with billets overnight. Early the next morning we embarked on the MV Frances Barkley for a gorgeous trip down the Alberni Inlet to Bamfield.
Our time in Bamfield was definitely a highlight for me. Our first night there, after an amazing potluck dinner provided by members of the community, we had “chamber music night”, where we played for each other at the spectacular Rix Centre - with its sea-shell shaped roof and big windows looking out onto the inlet and a beautiful sunset. Percussionists Kevin Grady and Robin Tosczak started off the evening with Steve Reich's Clapping Music; my brass quintet played Renaissance Dances by Susato; and Yariv invited string players to read the Mendelssohn Octet, which they played with more than one player on each part. Finally a jazz combo played several standards, with more players joining for each tune.

​Chamber Music Night - a string ensemble reads the Mendelssohn Octet at the Rix Centre
​ The entire orchestra and admin crew stayed in the dorms of the Bamfield Marine Sciences Centre, which resulted in a lot of socializing that night (and not much sleep!). The next morning we crossed the inlet and hiked to Brady's Beach for an intertidal tour guided by the Centre's Education Coordinator Anne Stewart. It was a perfect day - the sun was shining, and the sky, the mountains, and the glistening water were all clear, bright blue. We explored the beach and ate bagged lunches that the admin crew had prepared for us.
That evening the orchestra played a concert at Bamfield Community School. The turnout was so good that an extra row of chairs was needed, and we received many enthusiastic thanks from audience members afterwards.

The next day we travelled again under sunny skies, back up the inlet to Port Alberni. There, we enjoyed another great potluck supper, provided by the members of Trinity Church, and stayed with billets again that night.
Community Concert at Trinity Church in Port Alberni
The next morning, my brass quintet played for the Easter Service at Trinity Church, and the orchestra gave a community concert there that afternoon, which was also received with much appreciation.

Over the course of the tour we gave three education concerts and an open rehearsal for school audiences. Yariv really engaged the kids, talking about the music and giving them the opportunity to ask questions. Each section leader stood up and played a short excerpt to demonstrate the sound of their instrument. It was fun to hear the excitement when the kids saw and heard the tuba, for instance. The admin team, who were in the audience for these demonstrations, reported that it was obvious that some of the kids were really moved by the experience of these education concerts. Admin team member Richard Andersen shared this story and these pictures with me:

“In my position as semi-official photographer on the tour one of the things I tried to do was to find interesting subjects in the audiences. I encountered a good one in the school concert in Qualicum Beach. I was working from a side aisle as I photographed both the orchestra and the audience. There was a young girl who was clearly fascinated. I'm not good at estimating ages but I feel sure that she was in the early grades of elementary school. At times she followed the performance with rapt attention and sometimes she would beat time with both hands. At the end of the performance Yariv came down that aisle and the youngster moved out to meet him. I didn't hear her exact words but it was something like "How do you do that?". Yariv gave her his baton and she waved it excitedly. There was no doubt that the Orchestra reached that kid!”
​ Our next stop was Courtenay, where, after a great Mexican dinner at Cabaña de Marcos, some orchestra members stayed with billets, and some of the older ones stayed at a hostel. I was part of a large group that stayed with tuba player Doug Nelson's family, where we had a blast, hanging out in the evenings around campfires at their waterfront home. Our first morning in Courtenay was free time, with the option of going swimming at the Comox Valley Aquatic Centre. I was one of the many players who did go swimming, and had a great time - there was a wave pool, waterslides, and a hot tub, all of which we put to good use. That afternoon we played a community concert at Mark Isfeld Secondary School, and enjoyed a potluck lunch and supper, both provided by CYMC volunteers.
​ Our final destination was Qualicum Beach. On the way there we made stops to visit Cathedral Grove, which was stunning, and the shops in Coombs. In Qualicum Beach we stayed with billets, and had a free day to look around the town before our final concert. Some of my friends and I explored many of the shops, had lunch at a bistro, and went for a walk along the beach. We also took in the museum, which had opened that day especially for the GVYO. The concert that evening at the Qualicum Beach Civic Centre was very well attended. Corinne James, clarinettist Liam Hockley's mom, had done a lot of the coordinating for our stay in Qualicum Beach, and had even arranged that the town mayor welcome us at the beginning of the concert! The concert closed with Elgar's Pomp and Circumstance Marches, during which admin team members surprised everyone by appearing on each side of the stage - John Money waved a Union Jack, and Helen Money and Sheila waved “Will & Kate” tea towels. This Proms-inspired gesture added to the fun of the marches, and struck a chord with many of the Qualicum Beach audience members. 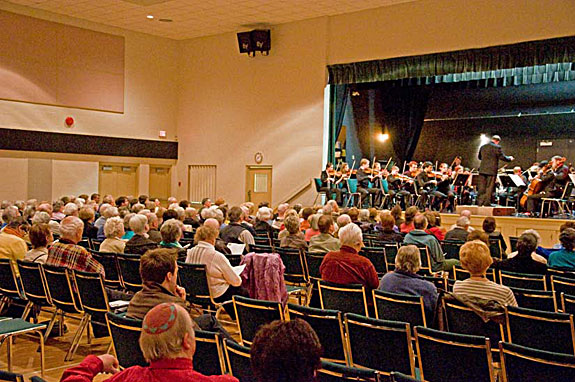 Community Concert at Qualicum Beach Civic Centre
On our way back to Victoria we made one last sightseeing stop to hike around Little Qualicum Falls. I was totally awe-inspired by the natural beauty of this spot - it was a wonderful final experience to come away with.
​Some of the magnificent views at Little Qualicum Falls
As the bus pulled up to St. John's Hall in the evening on April 28th, I felt sad that the tour had to end. I was so glad to have seen all of the places we'd visited; though I've lived in Victoria for five years, I'd never been to any of them. All of the community members we'd met along the way had been so friendly and generous, and had seemed to really appreciate our presence and the music we shared with them. I had made new friends with orchestra members I hadn't known well before the tour, and my previously existing friendships were strengthened. It had also been very heart-warming to observe the many acts of kindness and support for each other among my peers. And musically, with each concert we played, the orchestra got tighter and tighter - I thought we sounded like a million bucks at our final concert in Qualicum Beach! It was very satisfying to experience this growth as an ensemble, which was no doubt the result of practise, but also of everyone growing closer as friends.

I can't say enough about what an amazing organization the GVYO is. I feel very privileged to be a part of it, and am so grateful that I got to experience the 25th Anniversary Tour.
​
Aubrey Kelly, Trombone
Powered by